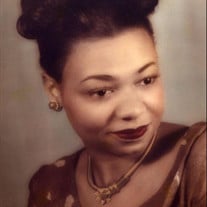 Willie Lucille Barnes was born on May 25, 1929 in Dyersburg, Tennessee to the late James Napoleon Barnes and Lela Bell (Tyus) Barnes. The youngest of three children, Willie was the only girl. Most of her younger life Willie was lovingly raised by her father James and step-mother Ellie, who was affectionately called ‘Mother’. At an early age Willie accepted Christ and was a member of Womack Temple C.M.E. Church in Dyersburg, Tennessee. Although her father was Presbyterian, Willie joined the Methodist faith like her mother. She graduated from Bruce High School in 1947, and attended Howard University in Washington D.C. until 1948. Upon returning home she spent a brief time as an Insurance representative for North Carolina Mutual. Willie moved to Detroit, MI in 1949 and on June 10, 1950 was united in holy matrimony to the love of her life, Robert Brown. Early in her marriage she worked for a short time as a store clerk at Lester’s Market on Hastings Street in Detroit’s Black Bottom. As a young homemaker she was a loving wife and later became a loving mother when God blessed their union with one daughter and four sons. Willie is predeceased by her: husband, Robert (03/1994); son, Reginald Brown (11/1991); two brothers, James Freeman Barnes (06/1995) and Johnnie Lewis Barnes (04/2002); mother, Lela Bell (10/1944), step-mother, Ellie Barnes (date unknown); and father, James N. Barnes (02/1991). In the early 50’s Willie joined Stevenson Temple under the leadership of Rev. Stevenson and in the 60’s, Willie became a member of the Christian Temple Missionary Baptist Church under the leadership of Rev. D. Mercier, where she was a member of the Nurses Guild and sang as a soprano in the Pastor’s Choir. She was also a member of the Eastern Star Detroit-East Chapter and an Avon Beauty Consultant for a time. Before illness took over, Willie was a fantastic cook and actively socialized with family and friends when her children were youngsters. To this day her children still reminisce about Sunday dinners featuring lip-smacking-finger-licking crispy fried-chicken, creamy mashed potatoes, homemade rolls, and made-from-scratch deserts (chocolate pie, fried peach pies, and cherry pan pie being favorites). Willie looked forward to having family around, and truly enjoyed seeing her grandchildren, great-grandchildren, nieces and nephews, and hearing about the happenings in their lives. She loved playing cards (Bid Whist and Rummy 2000), enjoyed watching Hallmark and old movies, listening to gospel (Mahalia Jackson was one of her favorite singers), some classical, and ‘old-old’ school R&B (Dinah Washington, Brook Benton, Sarah Vaughan era). She was also an enthusiastic fan of the Detroit Tigers and Detroit Pistons whether they won or lost. On Monday, March 22, 2021 with the sun shining brightly in the morning, the Lord quietly called Willie Lucille home. Her generous spirit and love will be missed by all who knew her. Willie leaves to cherish her sweet memory, beloved and devoted children – one daughter, Mrs. Linda A. Jamison (Carl) of Farmington Hills, MI; three sons, Mr. Robert D. Brown (Geraldine) of Plymouth, MI, Dr. James A. Brown (Semaj) of Flint Twp., MI, Mr. Harold B. Brown (Pamela) of Canton, MI; two step-sons, Mr. Jerry Parrish of Portage, IN, Mr. Robert Parrish of Indianapolis, IN; one sister-in-law, Ms. Loretta Dunivant of Dyersburg, TN; 13 grandchildren; 31 great-grandchildren; a host of nieces and nephews, and many kind and caring friends of the family. In lieu of flowers, the family asks that any contributions be sent to Jamison Temple Baptist Church Detroit, Bethel AME Church Ann Arbor or Newman AME Church Pontiac in the name of Willie Lucille Brown. Zoom Funeral Streaming Access #: 734-482-9889

Willie Lucille Barnes was born on May 25, 1929 in Dyersburg, Tennessee to the late James Napoleon Barnes and Lela Bell (Tyus) Barnes. The youngest of three children, Willie was the only girl. Most of her younger life Willie was lovingly raised... View Obituary & Service Information

The family of Willie Lucille Brown created this Life Tributes page to make it easy to share your memories.

Send flowers to the Brown family.