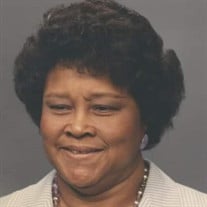 Rosie L Seed of Ann Arbor, MI departed this world for her heavenly home on Tuesday, May 12, 2020; at the age of 94 years old. Rosie as she was affectionately known by her many friends, family and Brown Chapel AME church family, was born on December 3, 1925 in Port Gibson, MS. She was the youngest of eleven children born to the union of Tom Jackson and Virginia (Grayes) Jackson. Rosie left her home in Jackson, MS to attended high school in Chicago, Illinois because there was no high school for African American children in Jackson, MS during that time. Shortly after graduation she decided to leave Chicago to move to Detroit, MI. Upon her arrival in Detroit she promptly enroll in both Cosmetology School and Hamilton Business College, where she was the school’s first African American graduate. In 1947 Rosie married Lamar Seed her husband for 65 years until the time of his death in 2012. Rosie was a devoted wife and to their union they have three children Murray, Detrus, Atalaya and honorary son’s Dion Marshall and David Malcolm. Rosie and Lamar were faithful members of Brown Chapel AME church in Ypsilanti, MI from 1947 until the time of their deaths, under the direction of Pastor Jerry Hatter. Rosie and her husband Lamar were very well respected members of the Ypsilianti, Ann Arbor community. Rosie was an entrepreneur, she opened her first shop “Rosie’s Beauty Salon”on Catherine St. in Ann Arbor, MI and later moved the location of her shop to Fourth St in downtown Ann Arbor during the late fifties early Sixties. She accomplished this as an African American woman during an era of harsh racism and social injustice. She also participated in several service organizations, notably the NAACP, The Palm Leaf club which was a organization of African American women that raised money to provide scholarships for African American girls wishing to attend college and for years she worked as a organizer and sponsor for the local African American Debutante Ball. Rosie was proceeded in death by her husband Lamar Seed, her parents Tom Jackson and Virginia(Grayes) Jackson, Brothers, Tom, Rosevelt, James Willie, Anthony and (WM) William, her sisters, Minnie, Willie, Marie, Josie, Virginia and nice Juanita. She leaves to her loving memory her children Murray, Detrus (Dee Dee), Atalaya (Laya) and grandchildren, Janel, Jazlynn, Ayvah, Matthew and great grandchildren Nickhlous, Nariah, Noelle, niece Ruth and her brother in-law Rev.Richard Seed, sister-in-law Verda Claybrooks-Clark and her cherished friend Mary Young; along with a host of other family, friends, nieces and nephews.

Rosie L Seed of Ann Arbor, MI departed this world for her heavenly home on Tuesday, May 12, 2020; at the age of 94 years old. Rosie as she was affectionately known by her many friends, family and Brown Chapel AME church family, was born on December... View Obituary & Service Information

The family of Rosie Lee (Jackson) Seed created this Life Tributes page to make it easy to share your memories.

Rosie L Seed of Ann Arbor, MI departed this world for her heavenly...