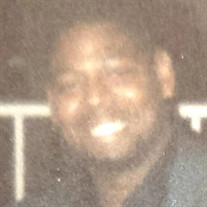 Kenneth “Ken” Tyrone Jones Sr. passed away on Tuesday, May 12, 2020 after a long battle with heart failure. He is survived by his children Ashlee (Westland, MI) and Ken Jones Jr. (Novi, MI); his older sister Vicki Jones (Ann Arbor, MI) and younger sister Keisha Jones(Memphis, TN) and younger brother Carlos Jones Sr. (Memphis, TN); nieces, nephews, and a host of cousins and friends. Ken was preceded in death by his parents Mary Carolyn Boyd and Vernor Jones, and younger sister Teresa Jones, and his maternal and paternal grandparents. Ken was born May 2, 1964 in Memphis TN to Mary Carolyn Boyd and Vernor Jones, and he was the second child of four children. Ken spent his formative and adolescent years in Memphis, TN, which made him a southern man at heart. He took pride in taking care of his family and working hard, which he instilled in his children. After graduating high school from Southside High and attending some college, Ken relocated to Ypsilanti, Michigan to help his mother. After arriving in Ypsilanti, he gained employment at Eastern Michigan University (EMU), as a Groundsman. He worked at EMU for 19 years until his retirement at the age of 36. During retirement, Ken received a second chance at life and received a heart transplant April 2, 2006, at the University of Michigan. Ken had a renewed vigor for life and he accepted Christ. He was baptized November, 2016 at New progressive missionary, where he was also a member of their men’s choir. Ken enjoyed spending quality time with his children Ashlee and Ken Jr. whom he was very proud of and often bragged about their accomplishments. He had love for barbecuing (and barbecues with family and friends), baking delicious lemon cakes, watching sports, fishing, attending concerts, and playing pool. Prior to his illness, he also enjoyed frequent road trips to his hometown of Memphis, TN. Ken will be deeply missed by his family and friends for his loving spirit, sense of humor, and the deep love he had for his children.

The family of Kenneth Tyrone Jones Sr. created this Life Tributes page to make it easy to share your memories.