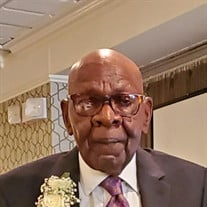 George West, Jr. peacefully departed this life on Thursday evening, June 3, 2021, at home with his loving wife, Susie, and his family by his side. George, more affectionately known as "Pete," was born on August 1, 1941. He was the fourth of eleven children, born to the late George Sr. and Ora Bell (Albert) West, in Cayce, South Carolina. It was there, in his hometown, that he met his childhood sweetheart, Susie L. Foster. The two were united in holy matrimony on August 22, 1964; and to that union, two daughters, Pamela and Veronica were born. In search of a more prosperous life and greater opportunities, Pete moved the family to Ypsilanti, Michigan. Pete would find employment at Motor Wheel, a Division of Goodyear Tires, and work there for 27 years, until his retirement. Pete was a faithful member of Christ Temple Baptist Church, where he worked tirelessly as part of the Kitchen Ministry. Pete found joy in serving, sharing his passion for cooking, and was always pleased when church members and family enjoyed his savory ribs and famous banana pudding. A man of wisdom, knowledge and integrity, Pete provided loving strength and was a great example of manhood. His dedication and sound guidance was the cornerstone of his leadership and leaves a rich legacy for his family. Pete was proceeded in death by his parents, his beloved in-laws, Louis and Bessie Mae Watson; siblings, Bernetha, Dorothy, Frank, Bobby, Vincent, Andrew, Kenneth, Shirley and Robert. Pete leaves to cherish his memory, Susie, his loving wife of nearly 57 years; daughters, Pamela (Billie Jr.) Wallace, of Ypsilanti, Michigan, and Veronica West, of Westland, Michigan; one sister, Brenda Bellard of Columbia, South Carolina; four grandchildren NaTasha (Eric) Myers, Nicholas (Octavia) Nesmith, Nicole (Mark) Dockery and Corey (Jordan) Nesmith; seven great-grandchildren, Marcus, Tayla, Quintin, Maliyah, Makayla, Rhylen and Marielle; a brother-in-law Anthony (Romanda) Watson of Cayce, South Carolina; a sister-in-law Darlene West of Ypsilanti, Michigan, a nephew, Tyrone Turner, with whom he shared a special bond; his cousin and ‘running buddy,’ Ernest Washington, many loving nieces, nephews, and a host of cousins and friends.

George West, Jr. peacefully departed this life on Thursday evening, June 3, 2021, at home with his loving wife, Susie, and his family by his side. George, more affectionately known as "Pete," was born on August 1, 1941. He was the fourth... View Obituary & Service Information

The family of George West Jr created this Life Tributes page to make it easy to share your memories.

Send flowers to the West family.