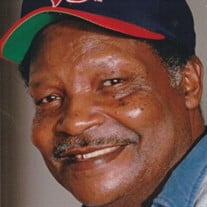 Robert Bond Jr, age 85, of Ann Arbor, Michigan died October 9, 2019 surrounded by family at his home. Born February 8th, 1934 in Jackson, Tennessee; he was the son of the late Robert Bond, Sr. and Hattie (Huddleston) Bond. Bob is survived by his loving wife of 64 years, Evelyn Bond; along with two children, Donna K. Bond of Ann Arbor, MI and April L. Bond of Ypsilanti, MI, five grandchildren, Jeremy Kinlaw, Jerome (Thelma) Kinlaw, DiOnna (Charles) Jordan, Akeme Okonkwo and Ahmil Bond, two great-grandchildren, Lana and Maya Kinlaw, his brothers, Charles Bond, Aldonis (Anne) Bond, Dwight (Edith) Bond, and sisters, Aletrice Payne, Sundrea Bond and Rita (Robert) Shivers and many loving nieces, nephews and relatives. He was preceded in death by brother Jimmie D Bond and sisters, Myrtle D. Seward and Ruthie Mae Vann. He was born in Jackson, Tennessee and attended Oak Grove School. He attended Walnut Grove Missionary Baptist Church and was baptized at an early age. He moved from Jackson, Tennessee to Alton, Illinois and then to Ann Arbor, Michigan in 1965. While in Ann Arbor, he worked at the University of Michigan Union and the City of Ann Arbor in the Maintenance, Parks and Recreation Department. He retired from the City of Ann Arbor after 24 years. Bob never really retired as he continued to maintain his lawn care/landscaping business he started. His family remembers him as a hardworking man who worked from sun up to sun down. Although he was baptized at an early age, he was a very religious man throughout his lifetime. He was a member of Metropolitan Memorial Baptist Church where he was a Deacon and sang with the mass choir. His love of music is evident in his family who remember him singing the blues and listening to gospel and blues. He sang so much he had his own group in Alton, Illinois called the Macedonia Hummingbirds where he was a strong bass voice. On those rare moments when Robert was not working, he travelled with his family, visited other family members, watched his Detroit Tigers and U of M basketball and football. He will always be remembered for his strength (who else could pick up the front end of a Chevy truck), his jokes, comedic sayings (remember “see you round like a doughnut”), quick wit, compassion for people and his infectious smile. The family would like to extend their sincerest gratitude to the Metropolitan Memorial Baptist Church and C&H Community Home for Funerals for being accommodating and understanding during this difficult time. A celebration of life service will be held at 11:00am at Metropolitan Memorial Baptist Church at 431 Hawkins, Ypsilanti, MI 48197. The burial will follow soon after at Chapel of Memorial Gardens, Belleville, MI. Friends may visit with the family on Friday from 4:00 until 7:00 PM and Saturday from 10:00 to 11:00 AM at the Metropolitan Memorial Baptist Church.

The family of Robert Bond Jr created this Life Tributes page to make it easy to share your memories.

Send flowers to the Bond family.