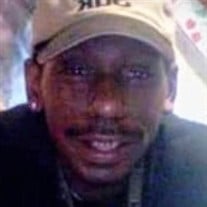 Richard Anthony Jones was born January 31, 1970 in Ann Arbor, Michigan to Dorothy Slay and Jim Jones Jr. Richard passed peacefully on December 14th, 2021, surrounded by his loved ones. He grew up in Ann Arbor, Michigan, attending school at Mack elementary, Slauson middle school, and Pioneer high school. While in school he participated in track and field, and football. Richard married Raina Jones in 1997. He spent most of his working years cooking for Metzgers, Gandy, Dancer, and Zingerman's. He did this while raising his 5 children. He was happiest spending his free time playing video games and watching movies with his family, and friends. Richard was a big fan of Michigan sports. Richard was a charismatic and passionate person. He was a devoted father and friend to many. He could put a smile on anyone's face. Richard was well known within the community for his fun and loving personality. He came from the historical Jones family, a family known throughout the Ann Arbor community for over 60 years. "The 4th & Beakes Crew", Richard is survived by his mother, Dorothy Slay; his five children, Jessie, Nate, Traell, Devon, and Kailin; and two grandchildren, Isaac and Winry. He will also be missed by his sister, Valencia (Derius) McCoy, and brother Curtis (Laura) Davis, along with his nieces, Venice, Courtney, and Arvion, and nephew, Seth, along with a host of relatives and friends. Richard was preceded in death by his father, Jim Jones Jr.

The family of Richard Anthony Jones created this Life Tributes page to make it easy to share your memories.