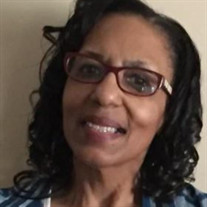 Regina Michelle Green was born October 25, 1954 in Detroit, Michigan, the eldest of seven children born to Dr. Melvin and Sylvia Hollowell. She ascended unto her Lord and Savior Jesus Christ on May 8, 2021. Regina was an excellent student. She graduated from the Academy of the Sacred Heart in 1972 and later enrolled at Cornell University, where she received her Bachelor of Science degree in Veterinary Science. She later enrolled at the University of Michigan where she received her Master of Art with a specialty in textiles and mixed media. It was there she met the love of her life, Rodrick K. Green, whom she married on May 16, 1987. Together, they raised twin daughters, Ashley and Laila Green. Regina was a gifted musician. She played the piano and harpsichord, studying classical music at the Interlochen National Music Camp. In addition, she had an artistic flair and studied at the Center for Creative Studies in Detroit. She became an Art Instructor in fibers at the Detroit Council of Arts and taught art expression to inmates at the Federal Correctional Prison in Milan, Michigan. For her talent, she received commissions from the Brunswick Theater in New Brunswick, New Jersey and received a University Fellowship from the University of Michigan. During her graduate studies at Michigan, Regina became seriously ill. Her illness forced her to leave school in 1980 and abandon her studies. She would not return until 1988. With fierce determination and an indomitable spirit, she returned to Ann Arbor and completed her program to receive her Masters Degree in Art, graduating in 1989. Still suffering the effects of her illness, she would let nothing stop her. She went on to create beautiful hand crafted greeting cards and other personal effects, under the guise of her newly created business, GinArt Productions, Inc. She received assistance from the State of Michigan for her entrepreneurial ambitions, and distributed her lovely creations to friends and strangers alike. For her many accomplishments, Regina was nominated for the prestigious Wansboro Award in 2003, which recognizes outstanding achievements of an alumnus of Sacred Heart Academy. She received special recognition for her accomplishments. Her greatest love was her family. Together, Rodrick and Regina raised 2 beautiful daughters, with the support and encouragement of her larger circle of family and friends. Regina was a woman of great faith. She was a devout Catholic and sang in the Choir at St. Marys Student Chapel in Ann Arbor and St. Francis of Assisi Catholic Church. When her husband became the Pastor of the New Hope Baptist Church of Ann Arbor, she was right by his side and she relished her role as New Hope's First Lady. They enjoyed travelling the country, from New York to San Francisco and Chicago to Miami. They especially enjoyed the isles, including Hawaii, the Dominican Republic and the U.S. Virgin Islands. Their favorite place to visit was Jamaica! Regina leaves to cherish her memory, her husband of nearly 34 years, Rodrick; her daughters, Laila and Ashley; her Grandson, Asa Rodrick Laverne Green; her Father and Mother, Dr. and Mrs. Melvin and Sylvia Hollowell; her sisters, Dana Hollowell, Danielle Hollowell and Dr. Sylvia Hollowell; her brothers, Atty. Melvin Butch Hollowell, Dr. Christopher (Catherine) Hollowell, Dr. Courtney (Carmen) Hollowell and many nephews, nieces, uncles, aunts, cousins, in-laws and friends. Truly, we will Miss Regina, whom her husband describes as the 'strongest woman I know'. Thank God for Jesus!

Regina Michelle Green was born October 25, 1954 in Detroit, Michigan, the eldest of seven children born to Dr. Melvin and Sylvia Hollowell. She ascended unto her Lord and Savior Jesus Christ on May 8, 2021. Regina was an excellent... View Obituary & Service Information

The family of Regina M. Green created this Life Tributes page to make it easy to share your memories.

Send flowers to the Green family.