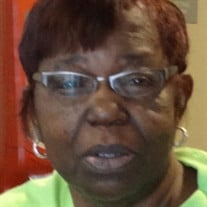 Pearl Ethel Jones was born December 3, 1943 in Moundville, Alabama to the late James and Roberta (Newman) Bishop. Pearl spent her teenage years in Tuscaloosa and was a graduate of Druid High School before relocating to Michigan where she lived the past 58 years. She married Edward Jones and they raised two beautiful daughters. In 1974 she received a cosmetology license from State College of Beauty and worked from home until she joined industry in 1986. She was gainfully employed by Econo-Pak which later became Alpha Plastics until she retired in 2009. Pearl LOVED family and ensured they gathered often. In the 60’s and 70’s Pearl and her siblings gathered weekly for friendly bid whist games while drinking Pepsi. She facilitated family vacations and traveled many places. She visited her daughter throughout her military career, attending events for her grandchildren that include high school and college graduations, and sporting events, i.e. football, basketball, bowling and baseball games. When her daughter Mylah worked for the airlines, she took full advantage as a jetsetter. They traveled to her hometown, Chicago and Las Vegas, to name a few. Pearl absolutely loved the Lord! She developed many special relationships including people from the bowling alley and the neighborhood. The bond she developed with the women on the corner of Eugene Street was impeccable. She was a mother figure to many of her children/grandchildren friends and they all referred to her as mom. She was known as the “Fun Aunt” to her nieces and nephews who loved being around her. She absolutely loved bowling competitively and loved winning. She has bowled in several leagues at various bowling centers such as, Lodge Lanes, Wayne Bowl, Thunderbowl, and many others over the past 50+ years. She was an EXPERT Spades/Bid Whist player and after learning how to use a computer, she became a daily player of games on Pogo and played cards with people who lived around the globe. Pearl was a lover of music and enjoyed many genres. Her favorites were Mighty Clouds of Joy, Marvin Sapp, Temptations and everything Motown, not to exclude Kenny Rogers and Elvis Presley. Pearl leaves to cherish her memory, her two beautiful daughters: Cassandra White and Mylah (Mack Jr.) Ivory; three grandchildren, Jamal White, Mack Ivory III and Myles Ivory; a sister, Mattie (Edward) Reveire; a brother, Johnny (Gloria) Bishop; a sister-in-law, Norma Bishop; nieces, nephews, cousins, and friends. She is preceded in death by her parents, her husband Edward, 3 brothers, Willie James Bishop, Jasper Lee Bishop, and Larry Donald Bishop; one sister, Rosa Mae Davis.

Pearl Ethel Jones was born December 3, 1943 in Moundville, Alabama to the late James and Roberta (Newman) Bishop. Pearl spent her teenage years in Tuscaloosa and was a graduate of Druid High School before relocating to Michigan where she lived... View Obituary & Service Information

The family of Pearl E. Jones created this Life Tributes page to make it easy to share your memories.