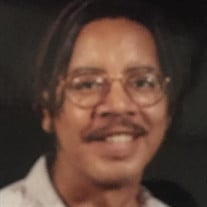 Myron Leslie Green was born on September 13, 1945, the oldest son of seven children born to Marion and Sybil Green. He departed this life on October 9, 2020. Born and raised in Detroit, he attended Second Baptist Church and accepted Christ at an early age. A gifted artist, Myron displayed an artistic flair as early as 4 years old, drawing concepts of automobiles. His artistic talent was nurtured at Tappan Jr. High School, and flourished in the Art Department of Cass Technical High School. Upon graduation, he earned a scholarship to the prestigious College for Creative Studies (CCS) where he continued his studies in art. Myron was a free spirit. He enjoyed his life and travelled throughout the United States and Mexico. At various times, he lived in San Francisco, CA; Boulder, CO; New York City, St. Croix, U.S. Virgin Islands and Puerto Rico. Wherever he lived, his environment influenced his artistic expression. As well as paintings of individuals, he created murals of landscapes, mask figures, jewelry and custom stationary, some of his work being featured in Ebony Magazine and in the lobby of the Penobscot Building in Downtown Detroit. He shared his art with many friends and family, including a beautiful piece that hung in the home of his Uncle and Aunt, Attorney Elliott Hall and his wife, Shirley. Fiercely independent, Myron's health was compromised when he was diagnosed with Multiple Sclerosis. He returned to Detroit from the Virgin Islands for his medical care, but never lost his love of art and passion for artistic expression. Even when he lost the dexterity of his fingers, he learned to design greeting cards by computer and sent many beautiful expressions to friends and family. Besides art, he enjoyed reggae, jazz and classical music and spending time with loved ones. He leaves to cherish his memory his sister, Dianne Hicks-Flourry, brother Rev. Atty Rodrick K (Regina) Green, sister Karen Green, nephew Robert Hicks, nieces Atty. Erica Adele (Jeffrey Kennerly) Green, Amber Foshee', Ashley Green and Laila Green, great nephews Emmanuel W. Hicks, Jeremiah W. Hicks, and Asa RT. L. Green, great niece Majesty D. W. Hicks, and a host of relatives, family and friends, including 3 special friends, Barry Mitchell, Attorney Michael Dallen and McArthur "Billy" Johnson. Myron was preceded in death by his parents; Marion and Sybil Green and his three brothers; Creighton Green, Geoffrey Green and Clyde Green.

Myron Leslie Green was born on September 13, 1945, the oldest son of seven children born to Marion and Sybil Green. He departed this life on October 9, 2020. Born and raised in Detroit, he attended Second Baptist Church and accepted Christ... View Obituary & Service Information

The family of Myron Green created this Life Tributes page to make it easy to share your memories.

Send flowers to the Green family.