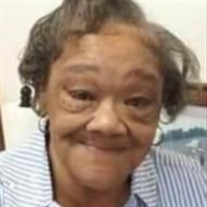 Molly Sue Hampton was born on April 6, 1949 to the late Claude Hampton Sr. and Mollie Mae (Smith) Hampton in Leighton Alabama. She and her family soon relocated to Michigan where she attended Ann Arbor Public Schools and later met Robert Lee Webster Jr. who she courted and married, and to this union were born five beautiful children. Molly was the proud matriarch of her family. She absolutely adored and enjoyed spending time with them. Over the years she was blessed with several grandchildren and great-grandchildren and she spoiled them immensely. It was said that she never forgot any of their birthday’s and made sure that each were celebrated and loved on their special day. The love she felt for her family was reciprocated as they often spoiled her as well, making sure that she in-turn had all the things she loved. Molly loved fragrances, cosmetics and especially red lipstick. A fashionista in her own right, she loved dressing up and being a blessing to others. She was affectionally known as “Susie-Baby” to her grand-son who often took her to the hair salon to get her finger waves done of which she absolutely loved. She had a smile that was contagious, and a sweet, sweet soul with a heart of gold. Molly had a heart for children, which was evident in the love and respect she received not only from those in her immediate family but also from her extended family and beyond. She was fondly referred to as a “second-mom” by many of her nieces and nephews and family friends. Her ability to connect with people on an interpersonal level gained her several adopted sons’, daughters, and grandchildren whose lives were forever impacted by the unconditional love she showed towards them. She accepted Christ at an early age and later affiliated with New Grace Apostolic Church of Ann Arbor, MI where she remained until the time of her passing. Molly was called to rest on June 22, 2020 where she transitioned peacefully in her home and is proceeded in death by her parents; one sister: Mary V. Harrison; two brothers Claude Hampton Jr. and Harry Hampton; three grandchildren: Vanessa Thomas, Montez Webster, and Torray Webster. She leaves to cherish her memory two daughters: Kim Webster (Mosiah) and Veronica Webster; three sons: Robert Webster III; Joseph Webster; Troy Webster; three brothers: Horrace Cooper Hampton; Sammy Hampton; David Hampton; and a host of grandchildren, great-grandchildren, nieces, nephews, cousins, and dear friends.

The family of Molly Sue Hampton created this Life Tributes page to make it easy to share your memories.

Send flowers to the Hampton family.