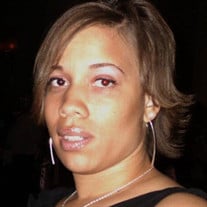 Michele Rene Patterson was born on March 29, 1975 in Ann Arbor, Michigan to the union of Nathaniel William Bowles and Cheryl Bass-Lee. God called her home on the morning of Saturday, June 5th, 2021. Michele received the Lord at a young age after an enthusiastic lesson on the rapture of the church by Sister Lois Holman in the primary Sunday school class. She spent many years growing in stature and in the Lord at Messias Temple Apostolic Church under the late Elder Jesse Ross and Bishop Harry S. Grayson. She served diligently in the Youth Department, Youth Choir, Junior Usher Board, Junior Wait Staff and later as an Adult Leader in Children’s Church. Michele enjoyed a lifelong journey with the Lord and later worshipped at Faith and Truth Apostolic Church, under the leadership of the late Pastor Glenn S. Gatewood and Pastor Jean Gatewood. Michele’s favorite scripture was Psalm 34:1, “I will bless the LORD at all times; his praise shall continually be in my mouth.” Michele graduated from Ypsilanti High School in 1993. She was a member of the marching band throughout her time in High School. She was excellent in her studies and maintained a high-grade point average. One of Michele’s most cherished achievements was graduating with her Bachelor of Science in Nursing from Eastern Michigan University. She was honored to be a lifelong member of the Ypsilanti community, where she was educated, and raised her two beautiful daughters, Ajura BreeAnn and Nevaeh Amere Patterson. Michele enjoyed fellowship with family and friends. She loved to laugh and was known for her devotion to God and her love of gospel music. In her later years, Michele was well-known for her testimonies of God’s faithfulness in her life. Those who knew her best and spent time with her, were encouraged by her relentless positivity and consistent praise of God. One of her favorite songs was, “Never Would’ve Made It” by Bishop Marvin Sapp. Michele was proceeded in death by her beloved grandparents, Melvin and Dorothy Bass, Pauline and Nathaniel Bowles Sr., her godparents Elder Jesse and Mother Ross and Mother Hattie Ruth Smith, beloved mother-in-law, Kriste Howard, and her step-brother Jason Lee. Michele left many to cherish her loving memory, her two beloved daughters Ajura and Nevaeh Patterson, father Nathaniel Bowles Jr., mother Cheryl Bass-Lee and Papa “Pete” William Lee, sister Bree (Tanard) Tooson, step-sister Shanna Lee, sister-in-law’s Nicole (Aubrey) Flynn, Stephanie Howard, Ashley Howard, and Amy Lee, brother-in-law, Tori Howard, a special nephew, Tanard Tooson Jr. (TJ), and a host of beloved aunts, uncles, nieces, nephews, cousins, and close friends. She left an inedible mark on many people to praise God through good and difficult times. She is now at rest in the presence of the Lord.

Michele Rene Patterson was born on March 29, 1975 in Ann Arbor, Michigan to the union of Nathaniel William Bowles and Cheryl Bass-Lee. God called her home on the morning of Saturday, June 5th, 2021. Michele received the Lord at a young age after... View Obituary & Service Information

The family of Michele R. Patterson created this Life Tributes page to make it easy to share your memories.

Send flowers to the Patterson family.