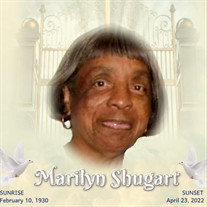 This is a one day only service Sunrise: February 10, 1930 ~~ Sunset: April 23, 2022 Mrs. Marilyn Deloris Shugart was born in Arkadelphia, Arkansas at 7:05 a.m. as a set of identical twin girls. Her sister, Mrs. Carolyn Delores Stitt (Holmes), was born fifteen minutes prior. Marilyn and Carolyn lived together as active seniors until February 2021, when Carolyn was called home. Marilyn resided in Michigan and Florida, until she was called home to be with the Lord. Marilyn is the daughter of Russell and Bertha (Booker) Holmes. The couple raised five children (Robert Lee, Joline, Marilyn, Carolyn and Dolorese), all of whom preceded her in death. Marilyn attended J. Ed Peake High School, located in Arkadelphia, Arkansas. Marilyn married her love, Mr. Albert Shugart, and the couple purchased a home on 19th Street in Arkadelphia, where they raised her only son Ralph Shugart, who went on to be an Army Veteran and Police Officer before his passing. Marilyn was exceptionally proud of her son. She worked as a hair stylist to help support her family. Marilyn would tell the story of when she was young teen, one she tried picking cotton to make a little money. She realized the employer paid based on the weight of the bag of cotton, which promptly resulted in her adding some rocks to her bag to increase the weight! Marilyn had her opinions on many things, rarely backed down from her beliefs, and was more than willing to share how she felt, when she felt you needed to hear it! Direct, yet polite, if you were getting on her nerves she would tell you by saying, “Now I’m trying to be polite here, but you need to go sit your butt down over there.” Marilyn loved to laugh, dance, watch western movies, shop and cook. Marilyn found great pleasure in shopping for clothing. She was the stylish twin, and could easily spend an entire day shopping for clothing, accessories or wigs. Marilyn loved a good BBQ meal, fried fish, pork rinds, pecans and especially the round pink peanut patties! She enjoyed going out to eat. Like her twin sister Carolyn, Marilyn received pleasure from seeing others enjoy her cooking. She’d cook meals and bake sweet treats with no special occasion needed. There were just a few rules to follow if she sent you to the grocery store to grab a few things. First and foremost, only purchase Reynolds Wrap aluminum foil, and not the small roll! Second, there’s no substitute for Crisco! Then there was her universal medical remedy for virtually everything from arthritis to gout. From time-to-time Marilyn liked to indulge in a little “brown liquor” as she called it. She never complained of her medical pains or even undesirable life situations. Instead, she’d say, “I know what will get rid of it!” or “…nothing touches it except a sip of brown liquor!” After which she’d always smile and giggle. Marilyn was a supportive wife, loving mother, and fierce defender of her mother. She lived to look after her elderly mother, and to be with her twin sister. Marilyn and Carolyn were always laughing, picking at each other and doing the simultaneous twin thing, like going into a store, head off in different directions and come to the checkout with the same items! The family takes comfort in knowing she is in God’s care, free of pain, and once again reunited with her twin. Marilyn was loved and cherished. We lost a gem and gained an Angel in heaven. Marilyn D. Shugart (Holmes) outlived her parents, child and siblings. She leaves to cherish her life well lived and those near to her heart: Kayla Walker-Hamlin, The Wingfield family, The McGhee family, The Currie family, The Jones family, The White family, The Sheldon family, The Witherspoon family, The Cooper family, and The Stitt family along with a host of other friends and extended family. Cremation to follow services.

This is a one day only service Sunrise: February 10, 1930 ~~ Sunset: April 23, 2022 Mrs. Marilyn Deloris Shugart was born in Arkadelphia, Arkansas at 7:05 a.m. as a set of identical twin girls. Her sister, Mrs. Carolyn Delores Stitt (Holmes),... View Obituary & Service Information

The family of Marilyn Shugart created this Life Tributes page to make it easy to share your memories.

Send flowers to the Shugart family.