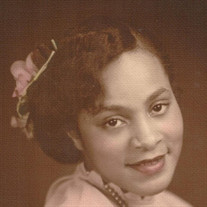 LORRAINE MAE GARRETT was born on Tuesday, August 28, 1928, in Detroit Michigan to the late Clifford and Zelma Wilkes. Lorraine was the youngest daughter of seven siblings (Mildred, Virginia, Viola, Ernest, Willis and Erman) all of whom proceeded her in death. Lorraine was raised in the Black Bottom section of Detroit, receiving her formal education in Detroit Public Schools. While attending Miller Sidney High School in 1944 Lorraine was quite the athlete. She played guard and forward on the basketball team and right fielder on the baseball team. Her school yearbook gave her the title of “The Hardest Batter” on the team. Her other hobbies were writing short poems, drawing, and skating. On July 21, 1951, Lorraine married Nathaniel (Nate) Garrett who proceeded her in death. Together they raised six children Victoria, Raymond, Ellen, Denise, Erin and Tameria. Lorraine’s extra children were her loyal dogs “Sir”, “Peanuts” and “Little Shots” and beloved cat “Cleo”. In 1968 Lorraine and Nate fulfilled their dream and moved the family to Belleville, Michigan to take advantage of the freedoms of country living. There was room for kids to play, gardens to be grown and even a pony! In 1972 while working as a Head Start aide (and at the age of 44) Lorraine was given the opportunity to pursue higher learning. She attended Wayne State University School of Education receiving a Bachelor’s degree in Education in 1976 and a Master’s degree in Special Education in 1983. Lorraine went on to teach for 15 years Kindergarten and Special Education in the Inkster School District. In 1973 and 1977 the Wayne County Head Start Program honored her with a Parent Involvement Award and Service Award. She was also a member of Kappa Delta Pi. Lorraine was also active in the community and in 1975 served as the Chairman of the 22nd Annual Torch Drive. Lorraine retired from teaching in June 1991 and began to pursue her bucket list. At the top of that list was traveling. She made frequent trips to various Caribbean Islands. However, she would say her most rewarding trip was to the continent of Africa. The most profound highlight of this trip was her visit to Goree Island and, “The Door of No Return”. Momma always said you could feel the spirits of the many slaves forced unto ships from this cold, dark place. However, the love she felt from the people of Africa, that touched her heart. She danced with them in ceremony, and they even called her “Queen”!! She was humbled in that place surely. Although Lorraine did not have a church home, In November 2020, she acknowledged Jesus Christ as her personal savior. You could see his hand working in her life and in her final hours. Some bore witness to his omnipotent presence and her peace as he led her home to Glory. Thank Lord. She leaves behind to cherish her precious memories her sons; Raymond and Erin and daughters; Victoria, Ellen, Denise and Tameria, 20 grandchildren, 34 great grandchildren and 10 great-great grandchildren and many nieces and nephews. Lovingly Submitted by the Family

LORRAINE MAE GARRETT was born on Tuesday, August 28, 1928, in Detroit Michigan to the late Clifford and Zelma Wilkes. Lorraine was the youngest daughter of seven siblings (Mildred, Virginia, Viola, Ernest, Willis and Erman) all of whom proceeded... View Obituary & Service Information

The family of Lorraine Mae Garrett created this Life Tributes page to make it easy to share your memories.

Send flowers to the Garrett family.