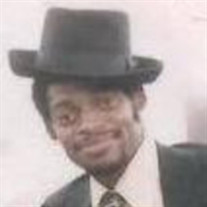 The sensational and astonishing local legend, Lloyd Wolford Porter Jr, better known to the masses as Soul Train, completed his story at age 73 on Tuesday, August 25th, in Ypsilanti, Michigan. A beloved, larger than life character well known throughout the area, Soul Train was an avid dancer, pool player and spinner of fantastical yarns. Outgoing with a big heart, he never met a stranger and was quick with a laugh and kind word. His prolific personality knew no boundaries, and his uninhibited charisma left an impression on everyone he met. He will be dearly missed. Those who knew him, and there were many, remembered Soul Train and paid tribute in various forums across the web. Although there’s not nearly enough room to list all of them, some have been shared below. “He called me “Karate.” Since 1999. I have no idea why. And just realized maybe it’s because I look like Ralph Macchio.” “I remember him from the Suds Factory in the middle 70s. Dancing man he was. Girls loved him. Long time ago.” “I remember him well!! Always had a story! Some made my eyes pop! And say what!! Great man. Great story teller. Good person! And yes...always at Suds Factory dancing like no other.” “Saw many times do the splits on the disco floor at Suds Factory. Nicest person. RIP.” “I met Soul Train in the the 70s also, in Ann Arbor. Over the years I got to know him as a fun loving person who liked to dance. He didn’t meet strangers and was a hard, honest worker. He will be missed by many.” “My wife and I met him over 10 years ago when we moved here to attend EMU. We were new to the area and lived in a loft downtown at the time. Soultrain made sure to introduce himself and tell us a story or two. It was incredible to meet him and experience his presence. It wasn’t until a few years ago that I had the pleasure of getting the nickname “Big Red” from him. RIP Soultrain, you made us feel welcome when we really needed it.” “Soul Train told me about how he beat Jackie Gleason in pool one night in Dayton OH and stole his wife for the night. As far as I’m concerned it’s facts.” “Good ol Wolford. Aka Soul Train. We were neighbors basically. Good man. Drove that Ford tractor to the bar all the time.” “Lloyd was a sweet soul. I met him one day when I was feeling down and he went out of his way to lift me up. I know he lifted up many others! May his memory be a blessing.” “He really was such a great guy! Just pure joy!!” “I remember playing pool against him. He could talk some shit. It was an honor to know him. Always telling some story that you just had to say “mmm hmm” to. Lol. What a character!” “I met Soul Train in the seventies!! He was the sweetest person to everyone.” “My fave Soul Train reality check moment - I was on stage at TCs, after a heated rock out, my eyes were burning, from sweat. Soul Train came over and handed me a white towel. I said “Oh man you’re the best!” and wiped my face. SUDDENLY, I smelled something awful funky, and realized he had given me a dirty towel used for cleaning the bar. Ugh. I realized he had taught me the meaning of “funk”. “My man Soultrain was cooler than a fan in January inside a room made of icicles.” “He was the best Ypsi acquired-taste-legend around. If you were lucky enough to have his autographed photo, you were lucky enough. RIP buddy. I remember having exactly one serious conversation with Soultrain at TCs. No talk of birthday, boats, jets or Vegas, just he and I talking about stuff he’s seen, what Ypsi was like when he was young, (in that famous picture many of us have). He was a real genuine cool dude, and I definitely appreciated him.” “I had no idea the first time I met Soul Train that he’d be a character who made regular appearances in my life. It was the early 90s, I was a student at EMU, and I was sitting on my front porch when Soul Train came walking down the sidewalk. He stopped in front of me, flashed a grin and started spinning some wondrous tale. Being from a small town where sidewalk niceties rarely went further than the weather and high school football stats, I was enthralled. Over the years, I had many experiences where Soul Train appeared and added a little sparkle and flair to an otherwise humdrum day. He made the ordinary extraordinary. He made the flat round. He made the dull and tedious shimmer. That was Soul Train. I’m really going to miss him.” “He had more birthdays than Methuselah. More weddings than Zeus. More time in Vegas than Wayne Newton. More trips on his private jet than Richard Branson. He owned every single pool table in town. He single-handedly renamed just about everyone in the city. He could bring a smile to you on your darkest day, just with his laugh and a "That's right!" He wore that purple suit like no one else could. He was Soultrain. He was our friend.”

The family of Lloyd Wilford (Soul Train) Porter Jr. created this Life Tributes page to make it easy to share your memories.

Send flowers to the Porter family.