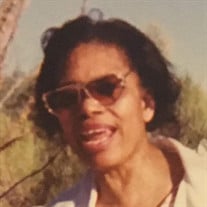 After a long enduring illness, on October 17, 2019, Ms Lessie Lee Hampton transitioned into that everlasting peace which can only be given by our Heavenly Father. Affectionately known as Miss Lessie, she was born May 25, 1930 in Steele, MO to the union of Julius Posley Sr and Marie Smith; she was one of six siblings . . . Lela P Wilkins (deceased), Ruth L Robinson – Atlanta, GA, Julius Posley II (deceased), Margaret Woods (deceased), and Teola J Parker (Ypsilanti, MI). Lessie professed Christ in the Baptist Faith at an early age and in 1993 converted to become a Jehovah’s Witness. On May 20, 1948, Miss Lessie graduated from Hermondale High School in the area of Steele, MO. One year later (1949) she relocated to Chicago, IL - Buchanan, MI then to Benton Harbor, MI – in 1951 she married Rufus Hampton (deceased). Lessie borne six children . . . Tyrone (Renee’ A) Hampton – Ypsilanti, MI, Larry O Hampton (deceased), Marsha M (Myron) Moore – Topeka, KS, Richard D Hampton – Fayetteville, NC, Sharon R Johnson – Ypsilanti, MI, & Shebra D Miller (Ypsilanti), and a "special son" Dr. Charles F. (Ronota) Henderson; she relocated to Ann Arbor, MI in 1968 and continued to be a source of refuge to many within the community. Lessie became a Licensed Practical Nurse in the late 1950’s in to addition her housekeeping duties as a wife and mother until relocating to Ann Arbor. She was further employed at Associated Springs, the Chrysler Motor Company on Zeeb Rd, and was a Patient Sitter until her illness prevented her from being viable. She leaves to cherish her memory, in addition to those named above; Grand-Children (Larry, Shante’, Deanna, LaVianna, Brandon, Camel, Takisha, Robert (deceased), Michael, Latoria, Lil Shebra, Tyra, Jylessa, Leah, Asha, JaMarius and Isaiah to include a host of Nieces, Nephews, Great Grandchildren and Great Great Grandchildren . . . You Go Mama!!!!!

After a long enduring illness, on October 17, 2019, Ms Lessie Lee Hampton transitioned into that everlasting peace which can only be given by our Heavenly Father. Affectionately known as Miss Lessie, she was born May 25, 1930 in Steele, MO to... View Obituary & Service Information

The family of Mrs. Lessie Lee Hampton created this Life Tributes page to make it easy to share your memories.

Send flowers to the Hampton family.