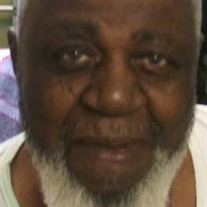 Kenneth Andrew Jefferson, Sr., age 76, was born on March 4, 1944 at Herman Keifer Hospital in Detroit, Michigan and left this earthly life on Friday, March 20, 2020. Kenneth was preceded in death by his grandparents, James Andrew and Silverlean (Holbert) Jefferson and Fred and Olivia (Walden) Kennedy; his parents, Isaac Andrew Jefferson and Katherine Olivia Kennedy; his son Kenneth Andrew Jefferson, Jr.; and, grandson, Keith Aaron Jefferson II. Kenneth was the only son of Isaac Andrew and Katherine Olivia (Kennedy) Jefferson. Kenneth attended school in the Willow Run School District with his favorite teacher being Mrs. Johnny Cheney. At the age of seventeen, he enlisted in the United States Army and was stationed in Germany during his time of service. Kenneth married his high school sweetheart, Francine Harris, and to their union three sons were born, Kenneth Andrew Jr., Keith Aaron and Kortney Alan. Kenneth (affectionately known to many as Big Kenny) took great pride in taking his sons fishing, camping and playing lots of different board games with them, especially Monopoly. Kenneth attended Washtenaw Community College and the University of Michigan - School of Education. He worked numerous jobs until health issues curtailed his employment. He was a construction laborer, a Federal Corrections Officer at the Leavenworth Detention Center in Leavenworth, Kansas, and employed for the City of Ann Arbor in Waste Management. He had a brain for numbers and mathematics, and an uncanny knack for successfully taking and passing tests. He loved reading. His favorite novels were westerns, and he knew a lot about the world and its history. He enjoyed playing cards especially Poker, Pinochle, and Bid-Whist with EL Weathers, Ike Harrison, Don Scott, Wendell Mason, and Gerard Williams, along with anyone else who dared to sit at the table. He loved the game of chess and was an avid chess game collector. Also, back in the day when everyone was on CB’s, he was known as Two-Dollar Bill. Kenneth was blessed to have a lifelong childhood friend, James Clayton (Baby James) Williams. They met at the tender age of 4 years old starting kindergarten together at Simmons Elementary School in Willow Run. Kenneth and James had an awesome relationship, as James was willing to do anything Kenneth wanted to do whether it was crazy or not. James Clayton was right by his side every step of the way, ready to help. Kenneth’s mind calculated math and life’s situations so fast that he often came off as combative and ‘hard-headed,’ but he was kind-hearted, giving and willing to lend a helping hand. During the season of his life when health challenges arose, he met Carolyn Abdullah-Brown. They were married in December 2017 and celebrated their companionship until his death. She often accompanied him when he went to spend time with his friends and love ones. Kenneth has entered eternal rest and he leaves to cherish his memory: wife, Carolyn (Abdullah) Jefferson; sons Keith (Janet) Jefferson and Kortney (Crystal) Jefferson; his sisters: Lavada (EL) Weathers, Brenda Sheree (Jay Bernard) Thomas, and Debra Jefferson; three nieces, Ena Lynette, Katherine and Angela Kandi (Robert); two nephews, Anthony and Aaron; one grand nephew, Donald EL Charles, and many grandchildren and great grand children to mourn his departure. He leaves too many friends and family members to name, but you know who you are, and he appreciated and loved you dearly. As a result of the coronavirus social distancing mandate, there was limited viewing at C & H Community Home for Funerals and a graveside burial at United Memorial Gardens in Plymouth, Michigan.

Kenneth Andrew Jefferson, Sr., age 76, was born on March 4, 1944 at Herman Keifer Hospital in Detroit, Michigan and left this earthly life on Friday, March 20, 2020. Kenneth was preceded in death by his grandparents, James Andrew and Silverlean... View Obituary & Service Information

The family of Kenneth A. Jefferson Sr. created this Life Tributes page to make it easy to share your memories.

Send flowers to the Jefferson family.