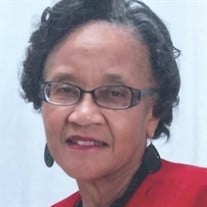 She was born Johnie Mae White on December 15, 1928 in Hope Hull, Alabama as the eighth child of eleven children. Her parents were Parham, Sr. and Annie Jane (Russell) White. Johnie started her education in the Hope Hull School system. With fire and determination, she earned an Honors General Education Diploma (GED) from Ypsilanti High School in 1983. At an early age, Johnie accepted Christ at Big Zion AME Church in Hope Hull, Alabama. She was a member of Metropolitan Memorial Baptist Church in Ypsilanti under the leadership of Rev. Dr. S.L. Roberson. During her time of membership, Johnie was faithful to the Usher Board, Mission Ministry and the Mother’s Board. During Johnie’s Christian journey, she received numerous awards and recognitions, such as the Valiant Woman by Church Women United, Outstanding Achievement in Christian Education, Religious Promotions Certificate from the Wolverine State Baptist Convention Women’s Auxiliary, and a Certificate of Appreciation for dedicated Christian service from the Huron Valley District Association (HVDA). During her years with the HVDA, Johnie served as the third Vice President and chaired the Convalescent Care Committee. She was the President of the Mission Ministry at Metropolitan Memorial Baptist Church. Part of her ministry was visiting the sick and shut ins. In addition to being a faithful servant of the Lord, Johnie worked hard to help provide for her family. After working in restaurants, she started as a housekeeper at Beyer’s Hospital. Eventually she would become the first African American female Supervisor of Housekeeping. Johnie was preceded in death by her husband, Josh, Sr. and parents, Parham, Sr. and Annie Jane White. Her eight siblings, Cornor, Samuel, Ulysses, Annie Lee Clark, David, Sr., Rubbie, Sr., Parham, Jr., and Carrie Wright also preceded her. Johnie is survived by her six children: Marshall (Rose), Cornor, Josh, Jr., Glen, Carla and Amanda Bramble as well as her devoted daughters-in-law, Mary Weathers and Aldred Martinez. She has eight grandchildren: Glen Marvin, Natasha, Sanura, Marco Andritschke, Aisha, Cornor II, Andwele, and Dominique. Her legacy is continued by eight great-grandchildren and three great great-grandchildren. She also leaves behind two sisters who cherished her dearly: Dora Lee Crittendon and Corrie (Welton) Wright as well as her sister-in-law, Serlena White. Additionally, she is loved by family and friends. A special thank you to Willie (Judith) House and Sharon Jackson for their dedicated friendship.

She was born Johnie Mae White on December 15, 1928 in Hope Hull, Alabama as the eighth child of eleven children. Her parents were Parham, Sr. and Annie Jane (Russell) White. Johnie started her education in the Hope Hull School system. With fire... View Obituary & Service Information

The family of Johnie Mae Weathers created this Life Tributes page to make it easy to share your memories.

Send flowers to the Weathers family.