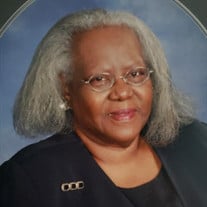 Janie Marie (nee Clark) Jones was born in Fenton, Louisiana, in 1934 to Martha Kelly and Hezekiah Clark. Miss Jones spent her youth in Louisiana and Texas prior to marrying and moving with two very young children to Detroit, Michigan. Ms. Jones had ample ambition although faced with the challenge of being a sole provider and parent she delayed her education until her children had been sufficiently launched. Ms. Jones earned her high school diploma at the age of 35 from Robichaud High School, Dearborn Heights, Michigan, in 1969. A great believer in education and the opportunities it affords, she returned to the educational arena and earned her Baccalaureate degree from Concordia College, now Concordia University, in Ann Arbor, Michigan, in 1989. She continued to study, taking classes toward a Master’s degree in education prior to her illness. She enjoyed working with children and worked as a substitute teacher and a volunteer for HeadStart in and around Ypsilanti, Michigan. Ms. Jones was a long-time advocate and employee in healthcare. She began working at the Ann Arbor Veterans Administration Medical Center in 1967, subsequently earning a certificate as a respiratory therapist. She worked consecutively in a volunteer capacity assisting veterans and their families to navigate the federal system to secure the benefits they needed, a role she continued long past her retirement in 2000. She was a tireless supporter for veterans and the military, having a connection through her siblings and their children who served. Veterans always held a special place in her heart. She was selected by then-Sheriff Douglas Harvey to join the Washtenaw County Sheriff’s Department in 1965, becoming the first female and the first black female deputy in the department’s history. She was honored for her service by Sheriff Jerry Clayton, and her memorabilia is on display in the Hall of Honor at the Sheriff’s Department headquarters. Ms. Jones was well-regarded in the community and professionally. She served on the Workforce Development Board, was appointed by then-Commissioner Mary Lou Murray to serve on the Citizens Council to the Juvenile Court, and served on the Superior Township Planning Commission and Board of Review. She campaigned for causes she believed in and maintained a friendship and collegial relationship with Congressman John Dingell, Congresswoman Debbie Dingell, Michigan Representative David Routledge, Sheriff Jerry Clayton, prominent attorney Willie E. Gary, and many others who supported causes she advocated. She joins her parents in her eternal rest, as well as her brothers Marvin, Joseph, Eugene, Leonard, and Thomas. She is once again riding herd over a crew of brothers who have certainly welcomed her and will guide her passage now. She leaves to celebrate her life her daughters, Mary Elaine Jones-Lawal and Genifer Jones Johnson; her grandchildren, Jessica Bintu Marie Lawal and James Victor Johnson; sisters Mae Louise Leggins, Helen Ruth Walker, Thelma D. Caine, and Eva S. Baham; brother, Adam; close cousin, Peggy J. Brown; her squadron of nieces and nephews; a multitude of friends; and a community that is better with her influences. The family appreciates the outpouring of love and condolences and will be joining all who wish to participate in a celebration of life at a later date.

The family of Janie Marie Jones created this Life Tributes page to make it easy to share your memories.