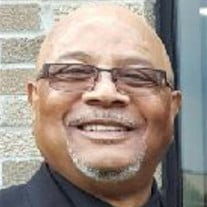 James Howard White was born October 21, 1939 in Shannon, MS to the late Thomas Earl and Ruth (Baker) White. James was a loving husband, father, grandfather, brother, uncle, cousin, and friend. James attended Lincoln Public Schools and after his schooling he worked to support his family as he was happily married to his loving wife Betty (Burton) White for 55 years. At a young age James worked at Pinter’s Nursery, worked construction, picked tomatoes (he couldn’t make no money because he was eating them all), before he was employed at Motor Wheel Company as the plant supervisor where he enjoyed cracking the whip for 32 years until he retired. Deacon White confessed a hope in Jesus Christ at an early age as his Lord and savior. He was a member at Mt. Calvary Baptist Church for 37 years where he served in multiple ministries including the usher board, male chorus, trustee, and chairman of the deacon board. He later moved his membership to St. John’s Missionary Baptist Church under the leadership of Pastor Hendricks where James served Christ through several ministries including Deacon, male chorus, and the brotherhood. James also carried the message of Christ through singing with the Hurricane Travelers and the Lord’s Messengers and being a member of the Masons. He truly was a vessel of honor for the Lord. James was a loving person and through his generosity he touched a lot of lives and everyone who knew him loved him. He had a passion to serve people by cutting neighbors grass, shoveling snow, and giving rides in his antique car in the 4th of July parade. James loved his van and 79 Caprice Classic and believe all cars should be clean at all times and full of gas. If you knew him you know he had a sense of humor and loved to tell jokes. James departed this life on Tuesday, July 7, 2020 at home with loved ones by his side. Those left to celebrate the memories of his life, three daughters: Yvette (Louis) Orr of Maryland, Andrea (Cuppy) White of Ypsilanti, Angela (Jessie) Nelson of Belleville; five grandchildren: Monica (Lamont) Russell, Jamel Sr., Donte, Chauncey, and Jamarius; four great grandchildren: Jamel Jr., Isaiah, J’Myiah, and Nasir; two Godchildren: Michael Jr. (Venisha) and LeKisha Ramsey; two adopted daughters: Cindy (Kenny) Nathan and Yvonne Chauncey and a host of nieces, nephews, cousins, and friends. He was preceded in death by his son Darryl Cameron; great grandchild Jayvon Calhoun; two brothers: Willie and Thomas White; three sisters: Lunette White, Sally Nyx, and Margaret (Napoleon) Williams. PLEASE HAVE A MASK ON FOR SERVICES.

The family of James H. White created this Life Tributes page to make it easy to share your memories.

Send flowers to the White family.