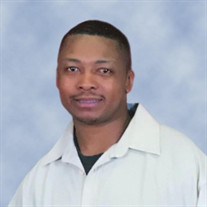 James Lee Jones, Jr was born on December 7, 1964 in Canton, Mississippi to the union of James L. Jones, Sr. and Aletha Jones. He was the oldest of five children. His sister Sybil Renee preceded him in death. On Sunday, February 21, 2021, James gained his wings. At the age of 7, James moved with his parents and sister Rozeta to Ann Arbor Michigan. At an early age he accepted Christ into his life. He was educated in the Ann Arbor Public School system; he attended Bach elementary, Slauson Junior High School and graduated from Pioneer High School in 1983. James (J-Rock) had an infectious smile. His heart was truly one of pure gold. Anyone that had an encounter with James, he always left an imprint on their heart. He was selfless, his compassion and gift for helping people meant you could count on him to be there. He would give you the coat off his back and the shoes off his feet if you needed them. His greatest love was his family. He was a devoted son to his Mother, a helpful Uncle to his nieces and a loving brother to his Sisters. James enjoyed playing basketball in his youthful years. He played for Ann Arbor Recreation Dept., He loved Michigan Football and the Detroit Lions. Lastly James loved his crew, and his lifelong friendships with Mike, Rodell (Roach), Richard (Squally), Lee (Tink), Lee S., Alan. James leaves to cherish his loving Mother and Father, Aletha Jones & James L. Jones, Sr.; His daughters, Venice Jones and Jasmine Mayana Patrice Ford; Sisters; Rozeta M. Warren, Tongula L. Jones, Shalonda C. Jones; Grandchildren, Angelo Tayshaun Jones, Jacob Elijah Jones, and Kenice Nicole Jones; Nieces Tiara L. Warren, Erica L. Taylor; great-nephews Brandon L. Drake, Jr. and Braylen E. Warren; great-niece, Jayla R. Ford, and a host of Uncles, Aunts, cousins and many dear friends. “How Long Will They Mourn Me” - 2Pac

James Lee Jones, Jr was born on December 7, 1964 in Canton, Mississippi to the union of James L. Jones, Sr. and Aletha Jones. He was the oldest of five children. His sister Sybil Renee preceded him in death. On Sunday, February 21, 2021, James... View Obituary & Service Information

The family of James Lee Jones Jr created this Life Tributes page to make it easy to share your memories.