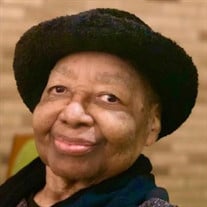 Deaconess Florita M. Perryman In the same way, the good deeds of some people are obvious. And the good deeds done in secret will someday come to light. 1 Timothy 5:25 NLT Deaconess Florita, affectionately and respectfully called Mother Perryman died in her sleep on May 25, 2020. Mother Perryman was born in Patterson Arkansas on February 26, 1939 to Ishmael and Duffie Mae Duffy. Both parents and four siblings, James Ellis and Ishmael Jr, Pauline and Willie Mae all precedented her in death. Graduated from Ypsilanti High School, Wayne State University- Labor Studies Center and Dale Carnegie. She retired from General Motors Powertrain Division, Willow Run, Michigan. As a member of the UAW, she and her brother, James would often visit Washington D.C., where she could be heard while shouting and marching, “Solidarity Forever”! She had three loves, her God, her Family and her church (Community Church of God and Lighthouse Community Church of God). It was Community Church that accepted her and her children as a place of safe harbor from the struggles of life. She enjoyed singing in one of the most gifted choirs in the land. Though she never stopped being a member, she asked the Late Reverend Fred L. Davis if she could take a leave of absence and go support her son in ministry. As a member of Lighthouse Community Church of God, formerly Wisconsin Avenue. She supported her son, Reverend Demetrius Booker for over 20 years. When he was called to serve in Ohio, she stayed to support the new Pastor, Reverend Dale E. Turner. While at Lighthouse, she became a Deacon and helped served communion and facilitate both foot washing and baptism services. She’s won many awards, but her most recent honor came last year when she was honored at the D.F.I.C. (one of the oldest African American Family Reunion and Investment Club in the nation), for her legacy of service as Chaplain and Mentor. Maya Angelou in their book, “Wouldn’t Take Nothing For My Journey”, once said, “Whining is not only graceless, but it can be dangerous. It can alert a brute that a victim is in the neighborhood”. This exemplified how Mother Perryman dealt with her struggles in life, she took lemons and made lemonade! She was an extraordinary mom, who raised five children, Ernest, Polinius, Paulette, Demetrius (Doreen), and Clifton. Along with her daughter, Paulette and son Rev. Demetrius Booker, she leaves to cherish three brothers, Willi Jr, Carl and Eugene Patterson. A grandmother of nine and great grandmother of twelve; a host of nieces, nephews, cousins. Too many to name, way too many to list.

The family of Florita M. Perryman created this Life Tributes page to make it easy to share your memories.

Send flowers to the Perryman family.