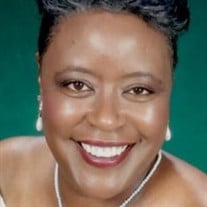 Fern Andrea Williams was the daughter of the late Andrew “Jody” Finch and Esther Leta Rankin (Knox). She entered this life on February 2, 1949, in Middletown, Ohio. Fern moved to Michigan in the 50’s with her mother and step-father, Wayne Rankin. After a courageous battle against dementia and coronavirus; she reached out for God’s unfailing hand on Thursday, July 9, 2020. She made her transition at the Villa of Green Lakes Estate Nursing Home. Fern accepted the Lord at an early age at Willow Run Baptist Church currently Christ Temple Baptist Church in Ypsilanti, Michigan. She rededicated her life to Christ at New Progressive Missionary Baptist Church in Ann Arbor, Michigan. Fern graduated from Willow Run High School in the class of 1967. In 2013, she retired after 44 dedicated years from the United States Postal Service in Ann Arbor, Michigan. Fern truly enjoyed life. In the early days, she liked bowling, a good game of flinch and was an avid softball player with many hearing her slogan “nobody walks but the mailman.” She was also a shopping fanatic. She bought two of everything. Celebrating the life of Fern Andrea Williams and rejoicing that she has found peace that only God can give her are her “one and only” child, Paige (Cynthia) Williams of Farmington Hills, MI, step-father Wayne (Flora) Rankin; sisters Enola Peterson of Canton, MI, Candace Rankin of Romulus, MI, Kristina Rankin of Ypsilanti, MI; brothers, Anthony (Thernesa) Rankin, of Ypsilanti, MI, Eric (Lisa) Rankin of San Diego, CA, and Brian Rankin; grandchildren, David Bouldin, Andrea Williams, and Paige Williams II and a host of nieces, nephews, cousins and her best friend Diane Williams. Ms. Williams was preceded in death by her parents and brother Basil. Special thanks to Naomi Williams, Jackie Smith and Linda Griffin for their dedicated support during her illness they could always be counted on to give support when needed. We will see you tomorrow at 4:00 PM for the family viewing. Please don’t hesitate to contact me if you have any questions at 248-760-3375.

Fern Andrea Williams was the daughter of the late Andrew &#8220;Jody&#8221; Finch and Esther Leta Rankin (Knox). She entered this life on February 2, 1949, in Middletown, Ohio. Fern moved to Michigan in the 50&#8217;s with her mother and step-father,... View Obituary & Service Information

The family of Fern A. Williams created this Life Tributes page to make it easy to share your memories.

Fern Andrea Williams was the daughter of the late Andrew “Jody”...

Send flowers to the Williams family.