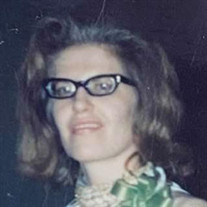 Erika Ann Horatschki-Malone was born September 1, 1945 in Tyrol, Kufstein, Tirol, Austria, to the union of the late Johann and Elizabeth (Link) Horatschki. Erika was the fourth of five children. While in Tyrol, Austria, Erika and her family were in the Haiming Refugee Camp. Eventually, her father changed their surname from Horacki to Horatschki. Her father then filled out paperwork for Displaced Persons with the International Refugee Organization in the Refugee Camp to obtain a safe place for his family to temporarily stay while he applied for immigration to the United States for his family. Erika, her parents and siblings immigrated to the United States from Bremerhaven, Germany arriving in New York, New York on June 26, 1952. Their ship was the General Harry Taylor. Erika was only six years old when they arrived. The entire family settled in Cleveland, Cuyahoga, Ohio on the West side off 117th Street. Erika was baptized at an early age when she attended St. Vincent DePaul Catholic Church, with her parents and siblings in Cleveland, Ohio. She later attended church with her sister, Irene in North Royalton, Ohio where they both regularly attended Bible Study. Erika received her diploma in Ohio and continued her studies when she moved from Ohio to Michigan. Erika moved from Cleveland, Ohio to Ypsilanti, Michigan in 2006 to be near her daughter and grandchildren. She was very social and made many friends in her new apartment community. She loved playing cards, cooking food for potlucks, and buying pretty wreaths to decorate the door of her apartment from her new friend. Erika was such a good cook that her friends started paying her to prepare meals for them. Erika left this life for her eternal heavenly home with her children by her side on Thursday, June 24, 2021, at 3:15 p.m. Her companion, Wilbur Kenneth Malone “Kenny” of Cleveland, Ohio, preceded her in death on November 2, 2002. Her brother, Albert James of Parma, Ohio, preceded her in death in January of 1998. Her sister, Irene Maria of North Royalton, Ohio, preceded her in death in October 2009. Her brother Peter Paul, of North Olmstead, Ohio, preceded her in death in April 2019. Erika leaves to cherish her memory: three children, Kenneth (Dawn, deceased) Malone of Cleveland, OH, Michele (Eric) Mahler of Ann Arbor, MI, Eric Malone of Atlanta, GA; four grandchildren, Desmond Ra’Shawn, Marcel Antonio, Simone Zaria, and Donovan Arthur Kenneth; one sister, Johanna (Albert) Hartmann of Parma, Ohio, and a host of other loving family members, including nieces, nephews, cousins, and friends. The Memorial of Erika Ann Malone will be held at: Brookpark Rec, 17400 Holland Road, Brookpark, Ohio 44142 on Saturday, July 31, 2021 from the hours of: 11:00 - 2:00 p.m.

Erika Ann Horatschki-Malone was born September 1, 1945 in Tyrol, Kufstein, Tirol, Austria, to the union of the late Johann and Elizabeth (Link) Horatschki. Erika was the fourth of five children. While in Tyrol, Austria, Erika and her family... View Obituary & Service Information

The family of Erika A. Malone created this Life Tributes page to make it easy to share your memories.

Send flowers to the Malone family.