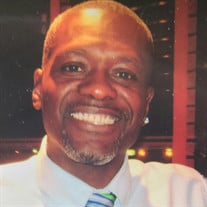 Eric Jerome Hall Sr., was called home to be with the Lord on December 4, 2021. He passed away peacefully at his home, surrounded by family. Eric was born on August 21, 1963, in Camden, New Jersey to the late Jerome Hall and Lottie Mae Wright. He was the eldest child, and firstborn son from their union. He moved to Ann Arbor, Michigan with his parents at a young age. Eric spent his adult years living in the Ann Arbor/Ypsilanti area until he made his transition to his heavenly home. Eric graduated from Ann Arbor Pioneer High School in The Class of 1981. Eric participated in football and ice hockey during his childhood and teenage years. After graduating from high school, Eric attended Washtenaw Community College. Eric was employed by the University of Michigan and St. Joseph Mercy Hospital. He also worked independently as a handyman, as well as doing construction, landscaping, and roofing. He especially loved the autonomy and freedom of working outdoors. Eric was loved by his customers, he valued and loved their support, especially the support of Mrs. Johnson. Eric married Sheree Moore in July 1997, to their union were born four beautiful children. They remained close friends until his passing. Eric loved the Lord and attended Bethel African Methodist Episcopal (A.M.E.) Church, of Ann Arbor, with his mother. Eric's interests were music, although he didn’t know the words to any songs he sang, helping seniors, fishing, and cooking. Eric thought of himself as a master chef. He made the best breakfasts and sandwiches. He was a dedicated Michigan football fan and worked each home game at The Big House. He enjoyed putting a smile on people’s faces, while spending time with his family and friends. Eric was meticulous about his appearance, he had the “Eric Way” of ironing and creasing his pants, and was known to be a great dresser. He was the life of the party and a joy to be around. Eric was a helpful soul with an infectiously beautiful smile who never met a stranger. He was loved by all and will be greatly missed by many. Eric was preceded in death by his beloved infant son Elijah David Moore-Hall, his father, Jerome Hall; his maternal grandparents, Mr. Willie Wright and Mrs. Lottie Wright; his paternal grandmother, Hattie Hall; and his brother, Stephan Hawkins. Eric is survived by his beloved mother, Lottie Mae Wright, and (step)mother, Katie Mae “Miss Katie” Hall. He leaves to cherish his legacy his sons Eric (Shacari) Jerome Hall Jr.; Dominique (Kiah) Hall; and Jordan Hall; his daughter, Shelby Hall; and his (step)son, Antawan Moore. His grandchildren Aubriel Moore, Jamari Hall, Amiya Hall, Kanye Hall, Kannon Hall, Zekhi Hall, and Zuri Hall. His siblings Vincent (Sonya) Hall, Harry (Dolores) Hampton, and Kirk (Wanda) Thomas. His (step)siblings Barry Wilson, Sonya Wilson, and Stephanie “Lynn” Wilson. He is also survived by a host of cousins, nieces, nephews, and dear friends whom he cherished and loved dearly. Let it be known that in Eric’s last days, he did not lose his battle with cancer, instead he surrendered his strong will to live, to God. The Family would especially like to thank those who took care of Eric while he was transitioning, a special thank you to Arbor Hospice and his loving (step)sister, Sonya Wilson

Eric Jerome Hall Sr., was called home to be with the Lord on December 4, 2021. He passed away peacefully at his home, surrounded by family. Eric was born on August 21, 1963, in Camden, New Jersey to the late Jerome Hall and Lottie Mae Wright.... View Obituary & Service Information

The family of Eric Jerome Hall Sr. created this Life Tributes page to make it easy to share your memories.

Eric Jerome Hall Sr., was called home to be with the Lord on...

Send flowers to the Hall family.