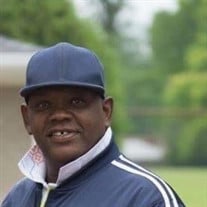 Donald Earl Reed,66 years young, transcended on July, 31, 2020 with his family and loving companion and caregiver, Kenya Lindsey by his side in Ypsilanti, MI where he resided as a long time resident. Donald Earl Reed, affectionately known as Don and Don Juan, was born to Dorothy Mae (Harris) Joplin and Charlie Wysinger Jr. in Detroit, MI on April 16, 1954. He and his brother Tommy Reed were fortunate to be raised by their loving grandparents, Ruby Dell and David (Slim) Harris. Donald attended Lincoln Consolidated Schools throughout his childhood until he became a young man and directly after high school he gained employment at Ford Motor Company entering into the workforce at a very early age. He was the third child born to his mother and has fourteen siblings (David Reed, Dyricia (Reed) Burrell, Tommy Reed, Danetta Joplin, Yvonne Joplin, Grady Joplin (deceased), Fay Joplin, Bernice Joplin, Dwayne Hudson, Lranda Gail Forrester, Diane Adams (deceased), Charles Dion Wysinger, Charlie Wysinger III (CJ), and Evelyn Jeanette Wysinger). As a child he was quiet, reserved and unassuming however, on the football field, basketball court or track he was a fierce and treacherous competitor and was driven to win at whatever he was engaged in. He truly excelled in football which was highlighted by several 200 yard games as a running back. He had a unique and exceptional skill in woodworking and carpentry. He was a natural at self-employment after retiring from Ford Motor Company. He was a pillar of the local community and was an active member among local businessmen. He maintained a personal office at a local restaurant, “The world renowned and famous Lucas Family Dining Restaurant”. Donald was a very loving and caring father to nine children (Six Beautiful and Intelligent Daughters and Three Very handsome and Very,Very Large Sons) Tameka Lewis, Dr. Neiunna L. Reed-Jones, Donnette Holton, Ladonna Lewis, Shadonna Lewis, Maryetta Gardette, John Wesley Lewis, Brian Dilmar and Antuan Reed. He was the coolest, most loving and understanding grandfather to over 16 Grandchildren (Granddaughters and Grandsons). Donald enjoyed spending time with his children and grandchildren. He loved having them over for sleepovers, attended many school events, sporting events, birthdays, and helped care for them before and after school. In addition, Donald was a father to any child that entered his domain, he loved children. Donald worked at Ford Motor Company mainly as a Hi-Low driver and was extremely diligent, working various jobs during his tenure and worked anywhere he was needed throughout the plant. He retired after 32 years of service. Following his retirement, he worked as a successful owner of a Moving and Recycling Service. Donald was a faithful church member of Grace Fellowship Church. He prided himself in having the most family members attend church with him for Family and Friends Day. Most importantly, Donald was very passionate about his volunteer work and worked tirelessly within the food pantry every month under the leadership of Pastor Powell. He also assisted with lawn care and was a helping hand to the church as necessary. Donald will always be remembered as a loving helpful man with a smile and laugh that brightened the darkest rooms. His calm demeanor and cool swagger helped create many memories that will comfort his family and friends. Donald always developed meaningful work and personal relationships throughout his life. If you asked anyone that crossed his path, he was known by everyone as a “Really Good Guy”. Donald’s last words were, “Life Goes On” these words speak to his ability to persevere through any adversity and his ability to push others to succeed in life. He was preceded in death by his mother Dorothy Mae (Harris) Joplin, father Charlie Wysinger, brother Grady Joplin Jr., sister Diane Adams and grandson Robert Brigham Jr.

Donald Earl Reed,66 years young, transcended on July, 31, 2020 with his family and loving companion and caregiver, Kenya Lindsey by his side in Ypsilanti, MI where he resided as a long time resident. Donald Earl Reed, affectionately known as... View Obituary & Service Information

The family of Donald Earl Reed created this Life Tributes page to make it easy to share your memories.

Send flowers to the Reed family.