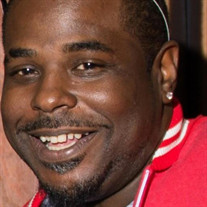 Darnell Tyrome Ginyard, unexpectedly entered into eternal rest on Sunday, December 5, 2021 at the age of 39. Darnell was born on July 3, 1982 in Ann Arbor, Michigan to the late Diane (Gatson) Buck and the late Terry Ginyard, Sr. Darnell attended Ann Arbor Public Schools for most of his schooling along with a short time at Willow Run High School. Darnell cherished his children, Darnell Ginyard, Jr., Amirah Ginyard, and was eagerly awaiting the birth of his third child Kyndall Ginyard. Darnell’s life may have been cut short, but he touched the hearts and lives of so many while he was with us. Darnell was a natural jokester who brought nothing but joy and positive energy whenever he was around. Darnell had the ability to ascribe a nickname to almost everyone he encountered. Once you were assigned that nickname, that’s exactly how Darnell would greet you with open arms and a big smile on his face. Darnell loved hard and would drop everything to be there for loved ones or friends in need. Darnell leaves to cherish his memory: his son Darnell Ginyard, Jr. of Ypsilanti Township, MI; his daughter Amirah Ginyard of Indiana; his soon to be expected son, Kyndall Ginyard of Ypsilanti, MI; his grandmother Beulah Gatson of Belleville, MI; six brothers: Richard (Mashira) Taylor II of Toledo, OH; Terry Ginyard, Jr., David Ginyard, Terrance Ginyard, Robert Harris and Seneka Harris all of Ypsilanti, MI; five sisters: Erica (James) Holmes, Nicole (Luster) Smith, Marion Harris of Ypsilanti Township, MI, Krystal Harris of Ann Arbor, MI and Lanise Harris of Detroit, MI; best friend Dollie Richardson of Ann Arbor, MI; a host of aunts, uncles, nieces, nephews, cousins, extended family and friends. Darnell was preceded in death by his parents: Diane (Gatson) Buck and Terry Ginyard, Sr.; his grandfathers: Jasper Gatson, Sr. and Henry Ginyard; his grandmother Carolyn Ginyard; great-grandmother Alberta Anderson; uncle Robert Gatson; great-aunt Dorothy James; cousins: Derrick Webb, Jacky LeTorry McEwen, Jasmine Thomas and Carlene Gatson. Darnell was loved by everyone who knew him and will be deeply missed.

The family of Darnell Tyrome Ginyard created this Life Tributes page to make it easy to share your memories.

Send flowers to the Ginyard family.