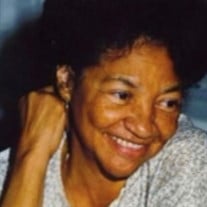 Cleo Theriot-Powell was born in Houma, Louisiana on August 30, 1926 as the tenth of twelve children. Born to the union of Enis Theriot Sr. and Ruth Taplett-Theriot, Cleo accepted Christ at an early age and was baptized at New Salem Baptist Church. After graduating from High School Cleo moved to Chicago, Illinois in 1944 where she worked as a waitress. After a few months, she decided to venture off to Flint, Michigan in 1945. She met a handsome man Vernell Powell and fell in love. Vernell left Flint and moved to Detroit and two weeks later he sent for her. They married on June 15, 1945 and to their union three children were born; Lolita Powell-Sims, DeBorah M. Powell-Sinclair and Kario D. Powell. Cleo attended nursing school at Burton Mercy Hospital and became a certified nursing assistant. She was offered a position at that same hospital at which she spent many years. She later accepted a position as a Paraprofessional assisting with special needs children. She loved the Lord and was an active member of Springfield Baptist Church and served on the usher board for many years. Cleo was an impeccable wife, mother and grandmother who enjoyed cooking, making clothes, crocheting and knitting. She made sure to pass these skills down to her daughters and granddaughters. When Cleo’s mother fell ill, she retired and left Michigan to care for her until her passing in 1984. Following her mother’s passing, Cleo and Vernell built a house in Mississippi where they resided until Vernell’s passing in 1987. She then moved back to Houma until 2008. Eventually, she decided to return back to Michigan to receive care from her daughter, Debbie. Cleo spent her last year’s bonding with her daughter and watching her grands/great-grands grow up until she received her wings on May 6, 2021. Cleo was preceded in death by her parents: Enis and Ruth Theriot; Eight brothers: Roosevelt Theriot Sr., Enis Theriot Jr., Earl Theriot Sr, Austin Theriot Sr, Newman Theriot Sr, Arthur Theriot, Alton Theriot and Warren Theriot; and three sisters: Belle Theriot, Nell Theriot and Ernie Theriot. She leaves to cherish the memory of her children: Lolita Powell-Sims (Lita), DeBorah M.Powell-Sinclair (Debbie) and Kario D. Powell; One daughter-in-law: Dora Powell; Four grandsons: Sean Sims, Ted Sinclair IV (Jay), Kario Powell Jr., and Khambren Powell; Four granddaughters: DeEdra Knowles, Angelique Sims, Nashanda Luvene-Ford and Marcy Scott; Four great grandsons: Keeon Sinclair, Marcus Finley, Adrian Luvene and Kyle Kemp; Four great granddaughters: Ashley Luvene, Ana Sinclair, Marcia Cheeks and Jacqueline Sinclair; Two great great grandsons: Kavious Sinclair and Kaiden Finley; and a host of nephews, nieces , family and friends. “Your life was a blessing, your memory a treasure, you are loved beyond words and missed beyond measure.”

Cleo Theriot-Powell was born in Houma, Louisiana on August 30, 1926 as the tenth of twelve children. Born to the union of Enis Theriot Sr. and Ruth Taplett-Theriot, Cleo accepted Christ at an early age and was baptized at New Salem Baptist Church. After... View Obituary & Service Information

The family of Cleo Powell created this Life Tributes page to make it easy to share your memories.

Cleo Theriot-Powell was born in Houma, Louisiana on August 30,...

Send flowers to the Powell family.